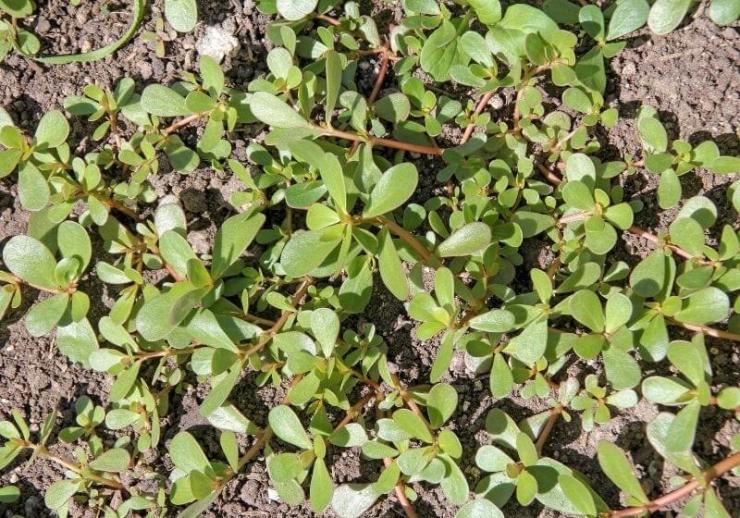 Is purslane edible? Since this is a common weed, you’ll most likely see it when you’re out foraging. But for beginner foragers, it can easily be mistaken with other weeds.

Well, to take the guesswork out of it, here is everything you need to know.

What You Need to Know About Purslane

Purslane is a leafy green plant. It is also known as pusley, pigweed, fat weed, or little hogweed. It has small green leaves, red stems and contains up to 93% of water.

Purslane can be eaten cooked or raw like lettuce or spinach in sandwiches, salads, or plain. It has a slightly tangy taste like watercress. However, its favor depends on whether you eat it raw or cooked.

When consumed raw, purslane is juicy and has a crunchy texture. It has a green apple flavor with a salty note to it.

When cooked, on the other hand, pigweed has the same texture as cooked spinach but will make a nutritious substitute for pasta.

Note: Keep in mind that purslane releases a sticky liquid when cooked. You may therefore need multiple water changes when cooking. The pigweed will also lose its green apple flavor when cooked.

Where Can I Find Purslane?

You mostly find purslane in open and sunny areas in your yard, garden, and even roadsides. As a weed, it is not picky about its habitat and will sprout on disturbed soil, gravel, sidewalk crack, and other natural places.

However, be keen about where you get your purslane when foraging to avoid ingesting toxins that can be found on sidewalks or roadsides.

RELATED: Foraging For Wild Edible Plants Across the Nation

How Can I Identify Purslane?

Identifying Purslane doesn’t require any special skill as these weeds are rather obvious to point out. Here are some straightforward identifiers:

Note: Since other weeds may have unnoticeably small amounts of latex that dries fast, ensure you identify with all the other pointers too.

Yes. Spurges are sprawling weeds that have a reddish coloring like purslane. However, their distinguishing characteristics are:

Does Purslane Have Any Nutritional Value?

Compared to other leafy vegetables, pigweed has a substantial amount of omega-3 fatty acids, not to mention its high iron and protein concentration. As far as vitamins and minerals go, fat weed has more magnesium, vitamin A and E than kale.

Watch this video as Go Green presents on the many nutrition and health benefits of purslane:

There you have it, preppers. Even as a weed, purslane packs more nutrients than most cultivated leafy greens, making it worth a forage. Be keen to identify it correctly, and your body will be thankful you did.

Do you more valuable information on purslane? Let us know in the comment section below!

Calling all preppers, craftsmen, bushmasters, outdoorsmen and all around skilled people, Survival Life needs YOU! Click here if you want to write for us.